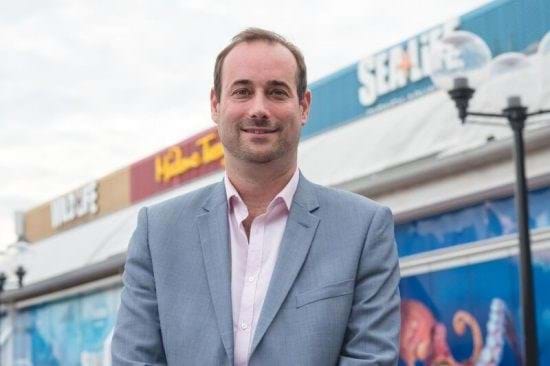 With over 20 years of experience in the tourism and attraction industry across Europe, the US and Asia-Pacific, Rob leads the overall management, regional strategies and financial/non-financial responsibilities for Merlin’s 10 attractions in Australia and New Zealand and Merlin’s 18 attractions across Asia. Key locations include the group’s cluster attractions in Shanghai, Beijing, Bangkok and Sydney with a mix of iconic brands including SEA LIFE, Madame Tussauds and LEGOLAND Discovery Centres.

Rob’s role as Divisional Director includes not only growth through the existing businesses but on-going development through new capital investment projects and further acquisition opportunities. Rob has been involved in many of Merlin’s new attraction openings as well as the investment and acquisition of the Sydney Attractions Group and Living and Leisure Australia.

Rob began his career in Sales and Marketing and over the years has expanded into broader operational and management positions. Originally from London, Rob studied in International Business Management at Manchester University before joining Merlin in 2001 as a Marketing Executive for three of the biggest theme parks in the UK; Alton Towers, Thorpe Park and Chessington World of Adventures. Whilst at Merlin – the world’s second-biggest attraction operator with over 130 attractions, 19 hotels and 7-holiday villages in 25 countries and across 4 continents - he has also been Head of Marketing at Madame Tussauds London and Marketing Director for LEGOLAND Discovery Centres overseeing the successful rollout of one of Merlin’s new brands and growth through new attractions into the UK, US and Asia markets.

Following Merlin’s $115 million acquisition of the Sydney Attractions Group, Rob moved to Australia in March 2011 as Sales and Marketing Director and Merlin’s portfolio of attractions in ANZ increased a year later following the $140 million acquisition of Living and Leisure Australia, including the two ski resorts at Mount Hotham and Falls Creek. During his time as Sales and Marketing Director, Rob also oversaw the relaunch and rebrand of all the existing attractions into Merlin’s Midway global Midway brand portfolio including SEA LIFE, the Eye and Madame Tussauds – including the successful opening of Madame Tussauds Sydney in Darling Harbour at a cost of $14.5 million.

In August 2015 Rob took on the role of Divisional Director for all attractions within Merlin’s Australia and New Zealand region, and in April 2017 opened the first LEGOLAND Discovery Centre in ANZ located in Chadstone, Victoria.

And if that wasn’t enough, in May 2019 Rob took on his next challenge and moved into the role of Divisional Director for the Asia Pacific Region. Rob is currently responsible for Midway attractions across the Asia-Pacific region including China, Hong Kong, Japan, South Korea, Thailand, Singapore, Australia and New Zealand.

Rob is also actively involved in Merlin’s Magic Wand, which assists disadvantaged children and the SEA LIFE Trust ANZ which is dedicated to protecting marine life. Rob is passionate about promoting diversity and inclusivity in the workplace and is an active board member of the Sydney Gay and Lesbian Mardi Gras.

Whatever the role, Rob says there’s one recipe for success in the tourism industry: a passion for the guest.